Notations On Our World: ON US Election Watch w/a Snapshot of coverage & commentary


It has been one week since the Democratic Debate.    Congress is back in Washington as the Speaker Race continues to heat up and as a number of pressing deadlines are before it.   It includes a raise in the Debt Ceiling along with a permanent budget.   The GOP fight is continuing especially as the testimony of Hillary Rodham Clinton comes up in a few days.

Our team worked on a full snapshot of some of the coverage and analysis over the past week.   We begin with this from one of the Conservative sites noting how the outgoing Speaker will faciltiate the raising of the debt ceiling to avoid potential downgardes of the full faith and credit of the United States:

As we were assessing the "broad view", our team saw this on what Government Employees must know Courtesy of Government Executive: 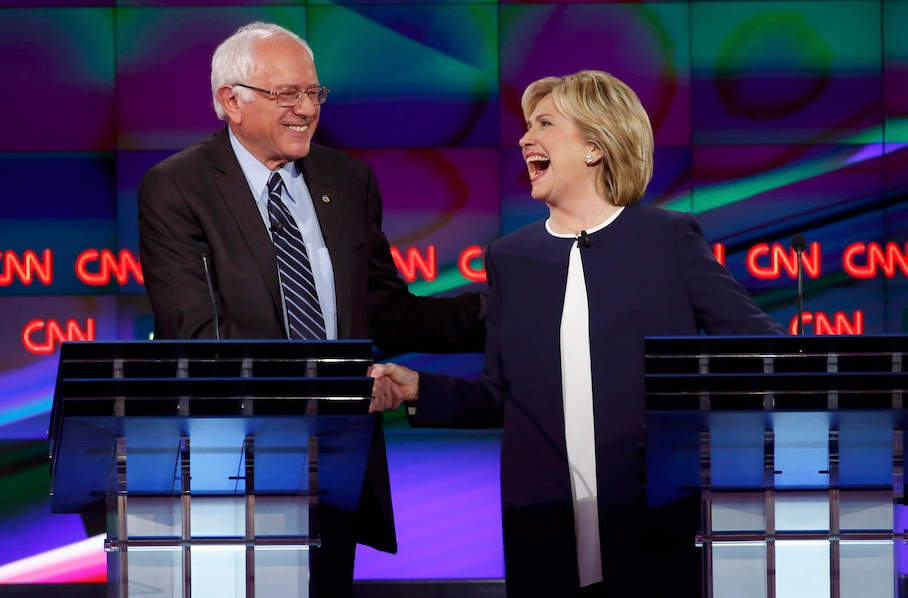 This was the "afteraction" report courtesy of the Daily 202 that James Hohman of the Washington Post puts out daily which we found to be quite interesting read:

Hillary Clinton celebrates after Bernie Sanders declares that, “The American people are sick and tired of hearing about your damn emails.” (Reuters/Lucy Nicholson)
THE BIG IDEA:
— Hillary Rodham Clinton was the only candidate on stage last night who looked like a plausible president. She had gravitas and filled the stage, while her four rivals came across as unelectable, unserious or both. In short, she solidified her status as the Democratic front-runner. Clinton’s strong performance will, at least temporarily, quiet doubts among party elites and make it less likely that Joe Biden enters the race.
The conventional wisdom among Washington elites that this was a T.K.O for HRC cemented overnight. This morning’s clips are, by far, the best Clinton has enjoyed all year. From nonpartisan reporters to thought leaders across the spectrum, there was a near consensus that Hillary won.

Joe Biden 's absence was telling.   He is supposed to make a statement over the next 48 hours on his plans.    This was also a take from "Daily 202" which was interesting read on this:
Hillary’s tight hug of Obama means there is less room for Biden. Mindful of a possible bid by the vice president, Clinton clearly wanted to send a message that she will aggressively compete for the Obama coalition and continue to grab for the president’s mantle. “I would have to think this would give him some pause,” longtime Obama strategist David Axelrod said of Biden after the debate.

The President, in the meantime, is continuing his efforts despite the headwinds of the challenges beyond America's shores.   This came through under his name as he begins the challenge of trying to get the TransPacific Partnership Agreement approved:

For the past few months, we've been hard at work finalizing the Trans-Pacific Partnership -- a trade agreement that puts American workers first, helps middle-class families get ahead, and levels the playing field for American farmers, ranchers, and manufacturers.
Last week, my administration reached that agreement with 11 other countries. That's good news for the global economy, and it's good news for American families and workers.
This wasn't a sure thing -- it took an incredible amount of organizing to get here, and OFA is one of the groups that has been fighting for leadership on trade.
Now that the deal is agreed to, I want to make sure folks have the facts about the Trans-Pacific Partnership before it comes to a vote -- if a trade agreement that puts American workers first is important to you,you can add your name with OFA to join the conversation.
Over the next few months, this agreement will be discussed and debated. It's important to remember that with 95% of the world's customers outside the United States and nearly 12 million American jobs supported by exports of products made in America, we can't leave it to other nations to uphold the values we care about -- we need trade agreements with tough, enforceable environmental and labor standards.
From the day I took office, I've fought for middle-class families, and this trade deal is no different.
But it's going to take organizing to help this agreement pass -- one way to get started is to add your name with OFA to show your support:
https://my.barackobama.com/Stand-Up-For-Progressive-Trade
Stay tuned -- more soon,
Barack Obama

In the meantime, there is Jeb Bush.    He continues to struggle in the Polls.   Ben Carson and Donald Trump continue to lead the polls--although some of the analysts have been noting that his support has "ebbed".     Right now, the "flavor" of the Mainstream Media is Ted Cruz.    This is as Jeb Sent out this fundraising appeal earlier:

I know we’ve been emailing you about this sweepstakes to meet the family in Houston at the end of the month, but news just broke that made it so much better.

If that isn’t enough of a reason to chip in $1 right now and enter, I don’t know what is. Remember, your flight and hotel are on us.

Mike, even if you’re still undecided in this GOP presidential primary, this is a once-in-a-lifetime opportunity that you’ll be talking about 20 years from now.

Chip in $1 for your chance to meet the whole family: Jeb2016.com/Houston-Sweepstakes-Donate/

There is also the Fundraising "race" that all have had to deal with.  Jeb has raised a lot of money--but is cutting back on Spending.     Ted Cruz is not spending much and has money in the bank.   The Money Race will be a determining factor.   Fortune released this "snapshot" over the Weekend after all the major candidates released their financials: