Notations From the Grid (Weekly Thoughts): #RandomThoughts on Forgiveness & LIfe

As a new week dawns, our team chose the following #RandomThoughts courtesy Jonathan Lockwood Huie and the Daily Stoic that brought things to focus for us--Please enjoy as we look forward to the continued privilege to serve: 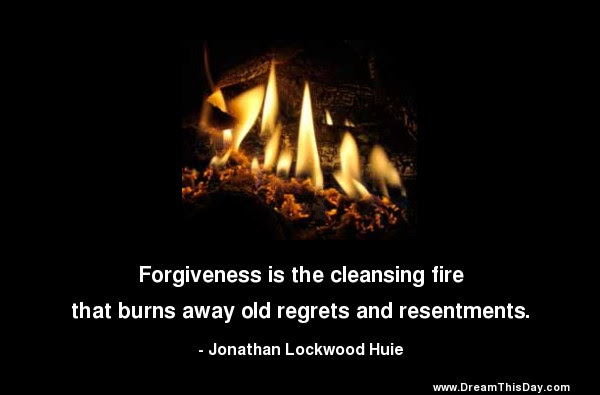 Forgiveness is the key to happiness.- A Course In MiraclesIn forgiveness you grant,and more so in the forgiveness you receive.- Terry GoodkindThe practice of forgiveness is our most importantcontribution to the healing of the world.- Marianne WilliamsonToday's affirmation:I accept everything that ever has been,with no regrets, no resentments, and no call for vengeance.- Jonathan Lockwood HuieFurther reading: Forgive Others for Your Own SakeHow to get over regrets and resentmentsFind Peace in ForgivenessForgiveness is Essential to a Great RelationshipBurned by Your Own Anger

Here’s a way to feel good every single day, no matter what happens. A way to appreciate even a day stuck in the airport or putting out fires.
It’s an exercise from Seneca.
A person who wraps up each day as if it were the end of their life, who meditates on their mortality in the evening, Seneca believed, has a super power when they wake up.
“When a man has said, ‘I have lived!’” Seneca wrote, then “every morning he arises is a bonus.”
This can be a hard concept to embrace, since fatigue descends on so many of us unwittingly, and day breaks before we are ready. But think back: to that one time you were playing with house money, if not literally then metaphorically. Or when your vacation got extended. Or that appointment you were dreading canceled at the last moment.
Do you remember how you felt? Probably, in a word—better. You feel lighter. Nicer. You appreciate everything. You are present. All the trivial concerns and short term anxieties go away—because for a second, you realize how little they matter.
Well, that’s how you ought to live. Go to bed, having lived a full day, appreciating that you may not get the privilege of waking up tomorrow. And if you do wake up—which we hope for all of you—it will be impossible not to see every second of the next 24 hours as a bonus. As a vacation extended. An appointment with death put off one more day. As playing with house money.
Because they are.

The philosopher and writer Nassim Taleb once said that, “Hard work will get you a professorship or a BMW. You need both work and luck for a Booker, a Nobel, or a private jet.” His point was that certain accomplishments are within the reasonable grasp of someone making incremental gains each day. Outsized success and outlier accomplishments require that and extreme luck or timing.
This is worth considering for all of us who grew up being told the world was a meritocracy. Of course, it isn’t. Plenty of brilliant people fail to succeed for all sorts of reasons, and plenty of not-so-brilliant people find themselves successful beyond their wildest dreams. The world is a random, even cruel, place that does not always reward merit or hard work or skill. Sometimes it does, but not always.

Still, perhaps a more usable and practical distinction to make is not between hard work and luck, but between what is up to us and what is not up to us. This is the distinction that the Stoics tried to make and to think about always. Pioneering new research in science—that’s up to us. Being recognized for that work (e.g. winning a Nobel) is not. A committee decides that. The media decides that. Becoming an expert in a field, that’s up to us. We do that by reading, by studying, by going out and experiencing things. Being hired as a professor at Harvard to teach that expertise is not (think of all the people who weren’t hired there over the years because they were female, or Jewish, or Black). Writing a prize-worthy piece of literature—up to us. That’s time in front of the keyboard. That’s up to our genius. Being named as a finalist for the Booker Prize is not.

It’s not that luck, exactly, decides these things, but it is very clearly other people that make the decision. Marcus Aurelius said that the key to life was to tie our sanity—our sense of satisfaction—to our own actions. To tie it to what other people say or do (that was his definition of ambition) was to set ourselves up to be hurt and disappointed. It’s insanity. And it misses the point.
Do the work. Be happy with that. Everything else is irrelevant.
Posted by TEST at 3:00 PM